For my first stop after Belgrade I decided to go to the Ovčar-Kablar Gorge, an interesting play of nature where the river Zapadna Morava by curling around mountains creates a ying-yang kind of figure, which can be seen very well from the viewpoint on Kablar mountain. On the way there I took a detour trough the hilly countryside of western Serbia, a nice ride.

After enjoying the view over the gorge I decided that this was actually quite a nice spot for a wildcamp,  so I did. There were two picnic tables and benches installed which seems to be frequently used considering the waste laying around. Before installing my camp I first did a quick cleanup of the area.

I stayed another night to give myself some more relaxing time after all the activities in Belgrade. After my stay on the mountain I visited two of the monasteries build on the peninsula, the first one Uspenje Monastery being in a nice condition and with icons and paintings inside but without much action going on, and the second one basically being a vila like building with nothing much to see.

I continued to Užice where a castle could be visited. To get there was a bit of a challenge as my navigation system directed my to exactly under the castle, where an old train tunnel was located. I decided to leave the car at the tunnel entrance and continue on foot. The old train tunnel lead to the Užice canyon where an old riveted metal train bridge crossed the canyon to and old train station. The bridge and train station were restored to its former glory and at the train station a restaurant was created, although closed. The canyon itself is also quite idilic, and further uptown where the canyon becomes wider a city beach is created.

After some more hiking I arrived at Stari Grad, meaning Old Town. I was exception some medieval fortified castle, and maybe at some point in history this was the case, however now a ruin is all that is left and I was the only one there. The ruins gave a nice view over Užice, the canyon and the city beach.

That evening I stayed at my first Serbian campsite, Camping Drina in Bajina Basta, and especially the sanitary facilities were quite disappointing, one old leaky shower and a toilet in a moldy building. I thus stayed for only one night.

I visited the Ratsa Monastery and Bajina Basta. I also passed along the Tara National Park information Centre at the central square in Bajina Basta and despite the language bareer I got some valuable information, one being that it is allowed to wildcamp in the national park and also a hiking map.

On my way to Tara National Park I checked out an other campsite, but that one was closed. There are actually only 32 official campsites in the whole of Serbia so not a lot, and so far the first two I visited didn’t give me much hope for what to expect.

It was already in the afternoon when I arrived at the national park, not much time left for activities, but I did visit the viewpoint over Drina which was a nice view indeed. Afterwards I found a nice spot on some grassy field for a wildcamp.

The following day I gave hiking trough the National Park a try. I drove to a little village at the other side of the park where supposedly many hiking trails started from. I tried two different trails, and both of them were halfway overgrown by bushes and blocked by fallen trees. Also the lack of signs didn’t help much to make this a good hiking experience. However there were a lot of colourful butterflies everywhere and all the puddles were filled with frogs, salamanders and other life.

Tara National Park definitely has the potential to be a nice destination for enjoying nature, however at the current state it lacks infrastructure to do so.

I left the national park and had read some good reviews of Kamp Viljamovka in Kremna. And whow, what a difference with the campsite in Bajina Basta. The camping spots were situated between the pear trees and sanitation was in great condition. There was a nice area for socialising, with couches and tables, and a large destilation installation where a local rakia from the home grown pears was produced. At the arrival I was welcomed with a shot of this price winning pear rakia and many more would follow in the upcoming days.

Change was in the air though, and I had to setup the tent and awning quickly before the upcoming storm. I didn’t succeed and a heavy shower soaked me to the bone just before I finished setting up. Well, at least there was more rakia to warm up again.

I enjoyed the place so much that I stayed for four nights. I used the time to run laundry, write my travelogue, do research for my trip and had some great evenings socialising with two guys from Slovenia and more rakia.

It was time to move on to Visegrad, Bosnia and Herzegovina. On the way, just before the border i made a stop for a ride on the Šargan Eight train. This old trainload has been restored partially for touristic purposes and makes a ride thought the mountains near Mokra Gora. Due to the slope it has to cover it makes figure eight like route trough various tunnels hence the name. On the train I met an English couple traveling in their camper van for some months. meyouandpogo2.com.

Visegrad is known for the UNESCO World Heritage Site listed bridge over the river Drina, for being the birthplacece of Nobel Prize of Literature winner Ivo Andric, and for it’s role during the Bosnian war.

I had booked a small studio apartment trough AirBNB for only € 12 per night, only a couple of hundred meters from the bridge and with a view over the river. After checking in I visited the local tourist information, which provided some valuable information, crossed the famous bridge over the Drina and claimed a hill opposite the river with a nice view over the bridge and Visegrad.

The bridge over the river Drina was build in the Ottoman period by the architect and engineer Mimar Sinan. It has recently been renovated. 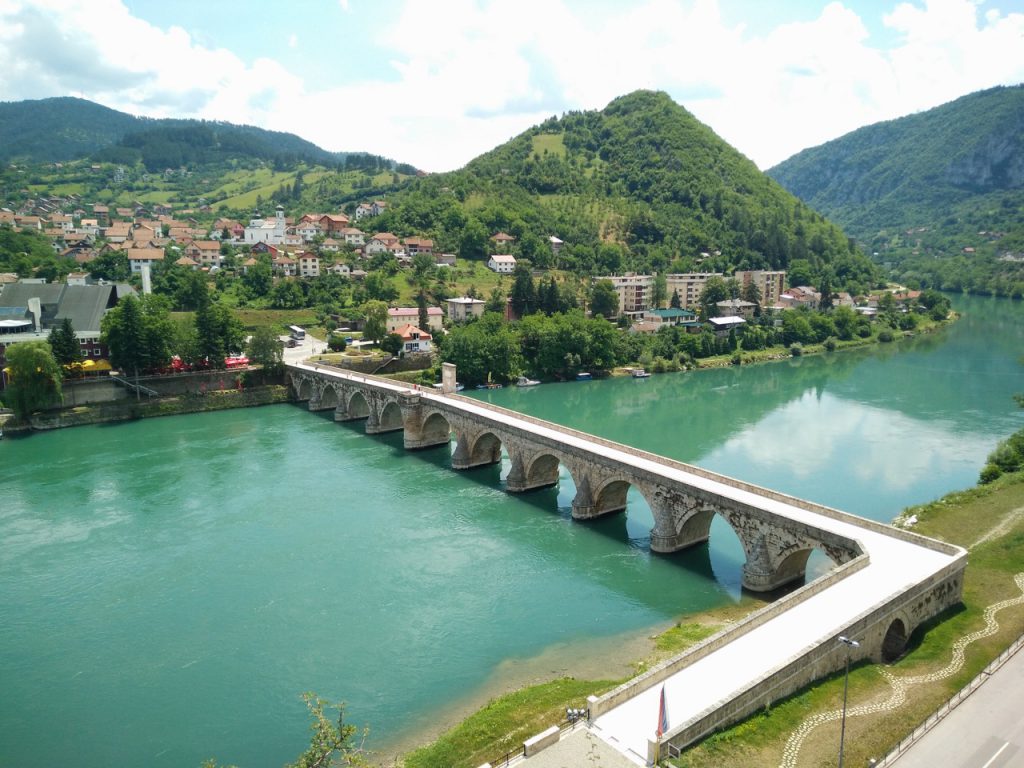 The bridge widely known because of the book The Bridge on the Drina (1945) written by Yugoslav writer and  Nobel Prize in Literature winner Ivo Andrić. To memorise this writer a new part of town had been erected under the name Andrićgrad, a rather grotesque and kitch area with restaurants, cinema, shops, orthodox church and also a library.

Visegrad has also a darker side. During the Bosnian war it played an important role during the conflict and a place of genocide and terror. I found a documentary on YouTube which tels a part of this grim story.

I had booked the apartment for three nights, which was actually one night to much as Visegrad doesn’t have much more to offer than the bridge. So it wasn’t to hard to pack and move on. I was still doubting if I should move back to Serbia, or drive op the Drina river a bit more and see more of this part of Bosnia and Herzegovina.

Before I made a decision I visited two sites. The first one being a wooden church which was signposted along the road. The church happened to be up in the mountains and the ride to get there was a fun one where I was happy to have a four wheel drive. The church itself was also a nice one.

Second I visited the Dobrun Monastery which dates from the middle ages. According to the guide books this monastery should an interesting yellow entrance, but unfortunately this has been painted white in the meantime.

At the end of the day I decided to check out Bosnia and Herzegovina just a bit more and drove up the river Drina to a restaurant named Jaz at a beach along the river. I had read that it was possible to camp here, which it was. The restaurant has a bit of a rund down beach club atmosphere with an empty swimming pool, and entrance to the river for swimming. Unfortunately this part of the river is heavily polluted with rubbish, so it didn’t attract me much to go for a swim.

In the evening I had some good socialising with the locals using Google Translate.