After a little week of hiking in Liechtenstein and Switzerland I went driving the Deutsche Alpenstraße, from te Bodensee to the Königssee, but first a technical issue with the car needed to be solved.

Since I picked up Brutus at the mechanic back home a knocking sound could be heard when making a sharp turn. Since I was about to leave for this Amsterdam to Sydney trip in about a week, and many other things had priority, I didn’t give it the attention it needed. Along the way the knocking sound got worse. I hoped to be able to make it to Slovenia, where the wages are lower, but wit the plan to drive 500 KM trough the German Alps I didn’t want to take the risk and took some time to have a look at it here in Germany.

After visiting a couple of mechanics I found one which had time and which could confirm my suspicion that the just replaced, supposedly good second hand, driveshaft was worn out. I did have a spare second hand with me though, so within a couple of hours and a couple of 100 € the thing was replaced. Now I could safely drive the Deutsche Alpenstraße.

The Deutsche Alpenstraße is a 450 KM road connecting the Bodensee with the Königssee trough the Bavarian Alps. It was created in 1927with the aim of connecting the transverse valleys of the Alps.

On the second day of driving I received a message from Eva, which I met in Latvia during my North Cape trip last year. I send her a message some time earlier telling her I would cross her home country Austria. It happened that she moved to Germany in the meantime and was only 25 KM away from where I was, so we agreed to meet for a barbecue that same evening. What a perfect timing. The next day she joined me driving an other leg of the Alpenstraße. We visited the Pelgrimage Church of Wies, built in the 1740s in the rococo style. While the outside of the church still had a somewhat modest appearance the interior is an overwhelming cacophony of decorations, or bling bling like we would say nowadays.

Afterwards we found a nice spot along a small river where we had an other evening with barbecue and campfire. The next day Eva cycled back home (we took her bicycle on my bike carrier) and I decided to stay an other day on this fine spot. 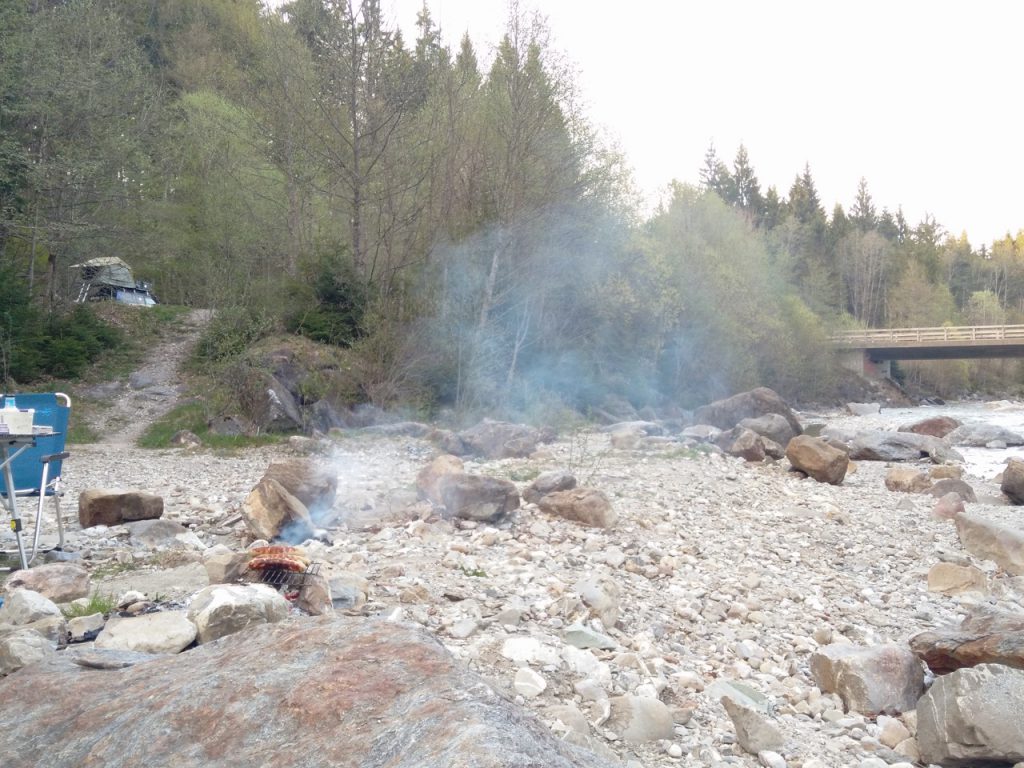 It took me a couple of more days to drive the rest of the Alpenstraße and I found some nice spots to wildcamp along the way, the last night close to the Tatzelwurm Wasserfall.

On the last day of driving the Alpenstraße the route was blocked due to roadworks and a long detour was needed to get back on the route. I decided to leave the Alpenstraße for what it is and continue straight to Leobendorp where I will be picking up an awning at the GordiGear European office, kindly provided by them.